Watermelon & the Wisdom of the Crowd

Two things we love here at UDig are silly contests and watermelon. On National Watermelon Day (August 3), we got to have a bit of both!

We were challenged to guess the weight of a watermelon by appearance alone. The only rule was that one could not pick up the watermelon before submitting a guess. The winner would earn the watermelon and (more importantly) supreme bragging rights.

Of course, when I hear about a contest like this, I think “Show me the data!” Specifically, I wondered whether the Wisdom of the Crowd phenomenon would apply in this situation. Basically, the Wisdom of the Crowd says that the collective knowledge of a large group of people is generally as good or sometimes better than the knowledge of any individual in that crowd. So immediately, I hypothesized that the average of our watermelon weight guesses would be close to the actual value.

After the contest had ended, I found out I did not win. However, I did get to digest the delicious raw data and make some interesting visualizations in Tableau: 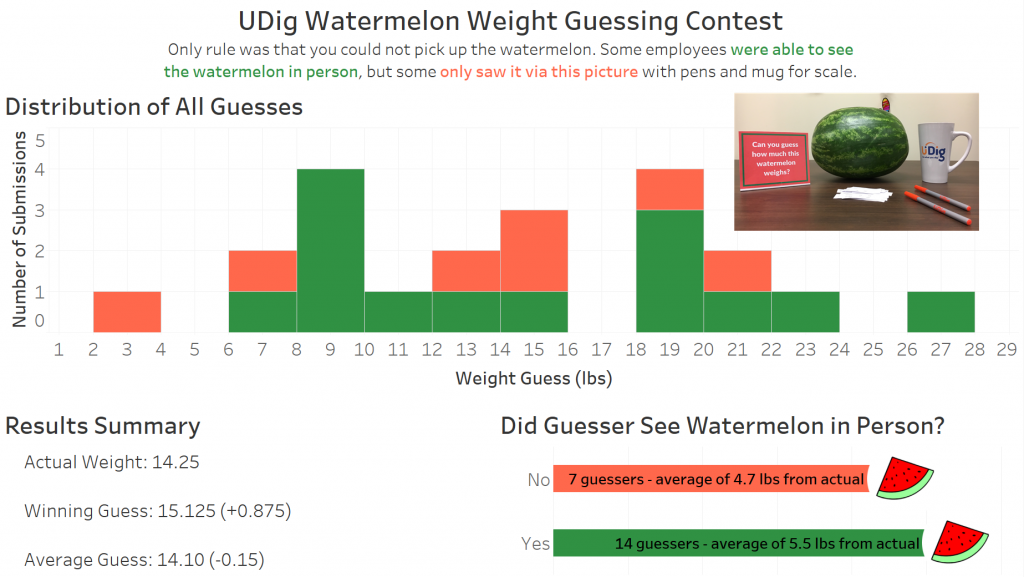 Two interesting insights popped out at me when I looked at the results. First, the Wisdom of the Crowd here did indeed prevail! The closest guess was 0.875 pounds away from the actual weight, but the average of all guesses was only off by 0.15 pounds.

Secondly, the folks that could actually see the watermelon in person rather than only via the picture performed worse overall; they had guesses that were on average further from the actual weight. One caveat for the second insight is that sample sizes in both groups were low (certainly not a robustly designed experiment, but still). Great job to everyone that managed to submit a pretty good guess from a picture alone!

That’s all I’ve got for now, and Happy Watermelon Day everyone!

Digging In with Reid Colson

Is the Databricks Lakehouse Right for You?

A Day in the Life of Brock Dulaney, Senior Data Consultant

How Do You Sell a Data Strategy to Your C-Suite?